So NBC News Reader Brian Williams has joined “All But Elected” President Hillary Rodman Clinton in re-imagining his war-time bravery.  Clinton as you may recall took “withering” fire from non existent guns on the tarmac in Bosnia in 1996.  Now Williams in an episode of “Can You Top This” recalls floating magically from a helicopter not under fire into one that did.

Both issued non-apology apologies that defied all logic.

However, this brave twosome have volunteered to be the “Tip of the Spear” in the fight against the Islamic State.  Magically Barack O’TomA’s dilemma of how to win a war without boots on the ground has been solved. 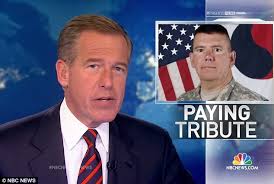 Author of truthaccordingtotom.wordpress.com
View all posts by tom →
This entry was posted in Entertainment, Health and wellness, humor, News and politics, Organizations, Travel and tagged Bosnia, Brian Williams, Hillary Clinton, Iraq, Islamic State. Bookmark the permalink.
%d bloggers like this: